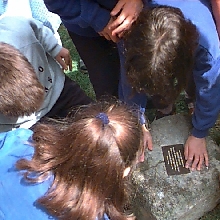 On Wednesday 8 July 1998, the Rev’d Hugh McCurdy dedicated a new memorial in the churchyard to Moses Carter, the Histon Giant. The date marked the 138th anniversary of his death.

Moses Carter (1801–1860) was nearly seven foot tall and weighed over 23 stone. He was a kindly man and a popular figure in the village. Children loved him. He would carry two or three under each arm and let them kick his legs and would roar with laughter, telling them to kick harder so he could feel it. Not only did he carry children, but he also could carry a coomb (18 stone) sack of corn under each arm.

As a bet he carried a huge boulder newly dug out of the ballast hole on Park Lane into the village. This stone can still be seen in the rear garden of the Boot public house. Another much recounted incident in his life was when Moses Carter went to Stourbridge Fair and in a boxing booth defeated all boxers and threw out the proprietor when he refused to pay Moses as promised. 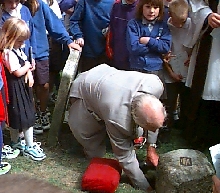 At the invitation of the vicar, and with the encouragement and assistance of the Village Society, children of Histon & Impington Junior School, who had recently completed a project on Moses Carter, prepared a time capsule for burial near Moses’ grave. The time capsule contains The Times newspaper of 8 July 1998, the Cambridge Evening News of the same date, the latest set of Post Office stamps which commemorate the fiftieth anniversary of the NHS, a £2 coin which had been released for the first time just a few days earlier, artwork and poems by the children and a facsimile of the News Chronicle of 7 July 1860. The latter was a weekly paper of the time and this issue was from the week in which Moses Carter died. Mr Alan Eade, chair of the Village Society buried the time capsule.

His stove pipe hat, and one of his hobnailed boots survive and were displayed at the service which preceded the dedication of the memorial stone.

Here are some of the children’s poems.

Moses Carter is a fighter.
He goes to the fair to earn his share.
If he don’t get his money,
He gets the man and throws him in the air!
The crowd thought it was funny.
HE GOT HIS MONEY!

Here comes Moses,
Don’t call him a clown,
Even though he’s been to a fair,
A bit out of town.

He threw the stallholder upwards,
The crowd caught him with a cheer.
Then in a bet he carried a boulder to Histon,
Just for a pint of beer.

About one hundred years later,
Guess what they found in a shed, not new?
Two belongings of Moses.
His hat and his size thirteen show!

The Giant of the Village

The Giant was huge.
He was not fat.
He wore on his head
A huge black hat.

All the people loved him.
He carried a stone.
He has walked to Ely.
He lived in Histon.

The happy days he had
Made the people smile.
He beat all the contestants.
He walked many a mile.

Then it came he was ill.
He was ill the great giant of all.
The people cried. They were sad.
No one else was so tall.

He died on the 8th of July.
He knew he was going to die.
He was buried in a coffin made from lead
And there he lies, it is said.